Tripe or Trippe? Depends Who You Ask

Whether it’s a family gathering, a church picnic, or a summer festival, Belgian trippe has been a staple of the Algoma area since Belgian settlers first arrived in in the 1850s. With our upcoming brat and trippe fry fundraiser for Concerts in the Park put on by Hotel Stebbins (Wednesday June 26, 2019 11:30-1:30pm), we started asking “is it tripe or trippe”?

Tripe first appeared in the Algoma Record Herald newspaper in syndicated columns “Household Matters” beginning in 1877, often focused on recipes.  One found in the February 1, 1877 paper called to “cut prepared tripe into small dice and put in a sauce-pan with some previously boiled onions, adding salt, pepper, and a few cloves; cover evenly with milk and let simmer twenty minutes. Just before serving, stir into it some butter and flour rubbed to the cream.” The author also notes that “you can stew tripe and oysters together” or “cut in squares [dip] in beaten egg and bread crumbs and fried brown.”

A gentleman writing for the Washing Capitol in 1883 had a disdain for tripe, stating “occasionally you see a man order tripe at hotel, but he always looks hard, as though he hated himself and everybody else.”  He continues “there is not money enough in the world to hire a woman to take a corner of a sheet of tripe in her teeth and try to pull off a piece.”  We imagine he and the previous author were referring to the traditional tripe, beef or other animal stomach.  Not the juicy and delicious cabbage and spice stuffed sausage of the Belgian variety we enjoy today.

Trippe made its first appearance in 1937 in an advertisement for Kashik’s Market.  According to historian Virginia Johnson, “it is the Kashik family whose name is synonymous with meat markets in Algoma. The company was in business over a period of 70 years when Foxy and Kutz, the last of the Kashik line, closed the last of Algoma meat markets.” 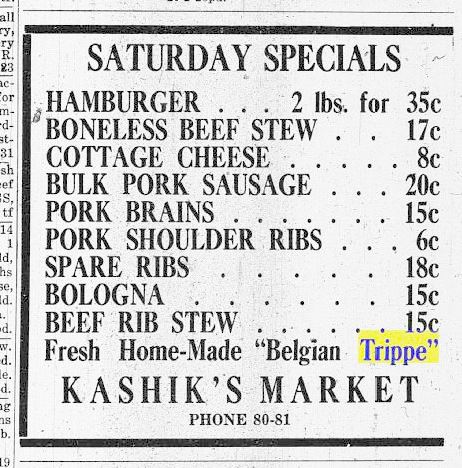 In 1938 the Rosary Society of the Holy Trinity Catholic Church (Casco) held a sauerkraut supper in the church basement.  Belgian “trippe” was served alongside roast pork and “baking of all kinds.”  This marked the first reference to trippe as a blood sausage. In typical Wisconsin fashion, “following supper, all popular card games will be played” which can only mean sheepshead or cooyah. 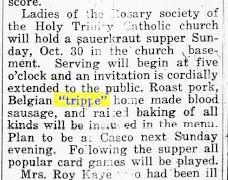 Nine years later the Forestville Cash Market advertised their “real Belgian tripe”, of which you only had to buy 10 lbs. to receive your free box of Jello! 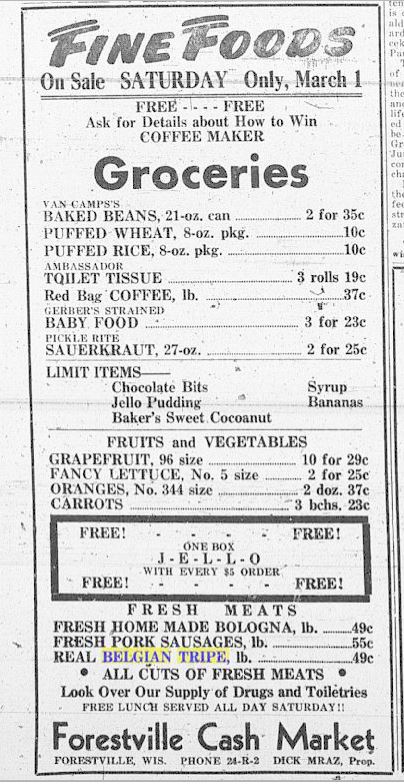 The Chatterbox, a weekly local gossip column, written by Lois Pflughoeft in the mid-1940s, noted in 1947 “it has been brought to our attention that several of Algoma’s meat markets are operating as travel bureaus, arranging ocean voyages, etc.  Why else would they be advertising a Belgian tripe?  (Fancy stuff, too, they spell trip with two “p’s” and an “e” at the end-trippe.)” Pflughoeft wrote many stories and became a news editor in 1955.

Local ethnic foods were the focus of a recipe book published in 1948 by five Kewaunee County homemakers Mrs. George Naser, Mrs. Lewis Lemens, Mrs. Carl Schwantes, Mrs. Kenneth Kirchman, and Miss Phyllis Knowles who asked their neighbors to “measure their pinches, dabs, and dashes” to create their favorite cultural dishes from 10 cultures in the county, including American cooking.  Top foods included Bohemian, Belgian and German recipes.  Mrs. Lewis Lemens, “collector of the Belgian recipes” stated”The Belgian people have long been famous for their cooking…Belgian pie is the favorite.  Belgian trippe (sausage) is another popular food which appears here along with liver sausage, head cheese, and hash. A recipe for crack jack, bismarchs, and New Year waffles are also noted. 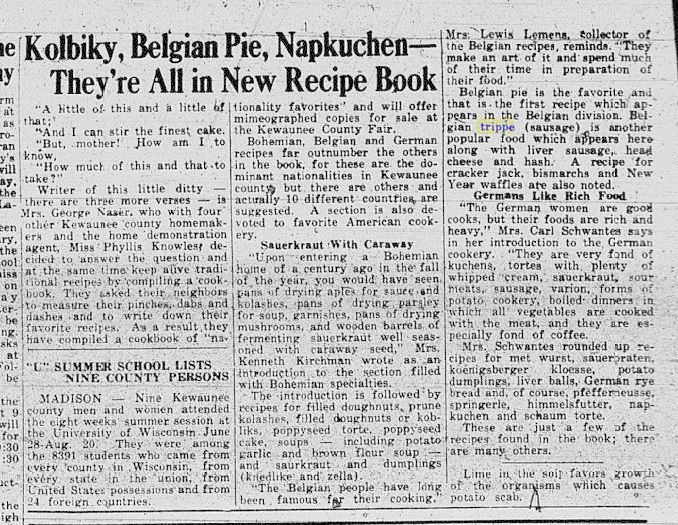 In the most interesting case of usage, Horak’s Market used “Belgian Tripe” in their Grand Opening ad in 1948 but then switched to “trippe” in their 1956 ad. Surprisingly, prices for the delicacy went down by 3 cents in the eight year span. 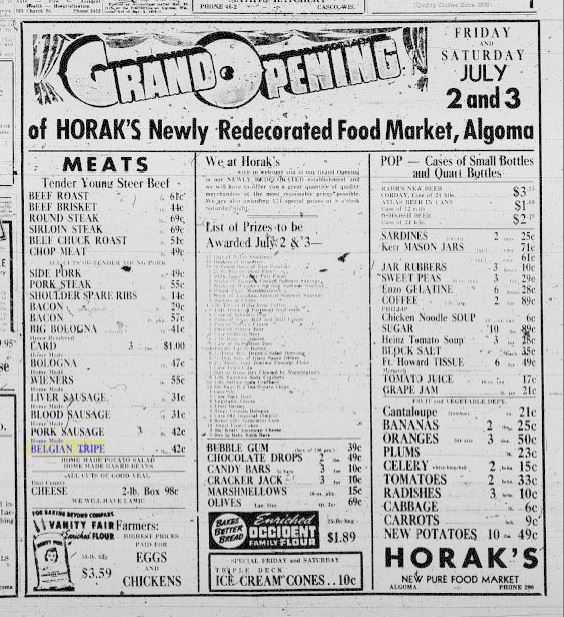 Regardless of how you spell it, we hope all readers of this small Algoma area history lesson come and support our brat and trippe Concerts in the Park fundraiser, generously provided by Hotel Stebbins.  Our Concerts series is a beloved free family fun event happening weekly on Thursdays in July and August. More information at www.algoma.org/concerts

If you miss your chance to try trippe at our fundraiser, support the Belgian Heritage Center at their annual Belgian Waffle Breakfast on Sunday June 23, 2019 from 9:00am-1:00pm at 1255 County Road DK, Brussels. The breakfast will include homemade waffles, eggs, potatoes, beverage and Belgian trippe.   More about the Belgian Heritage Center on the web at belgianheritagecenter.org. 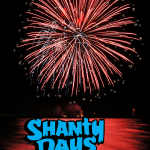 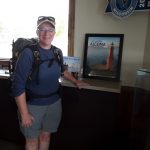 When A Hike Takes You Through Friendly AlgomaAhnapee State Trail, Algoma Visitor Center, Travel
Skip to content
Near me
40 miles