Downtown Algoma is home to scenic beauty, historic charm, unique shops, and
restaurants. The market will feature children’s activities, live music, and weekly
events such as a kid’s market, health and wellness activities, and learning and
education. 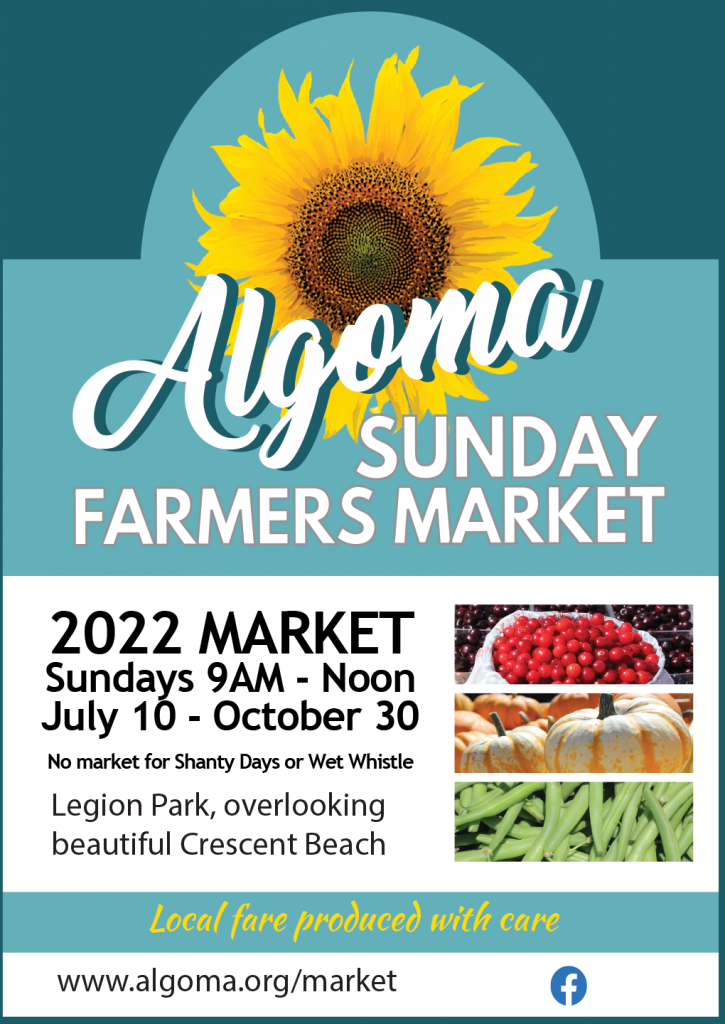 The 2022 Season of the Algoma Sunday Farmers Market is scheduled to run from Sunday, July 10 – Sunday, October 30 from 9AM – Noon.  [*No market during Shanty Days or Wet Whistle] 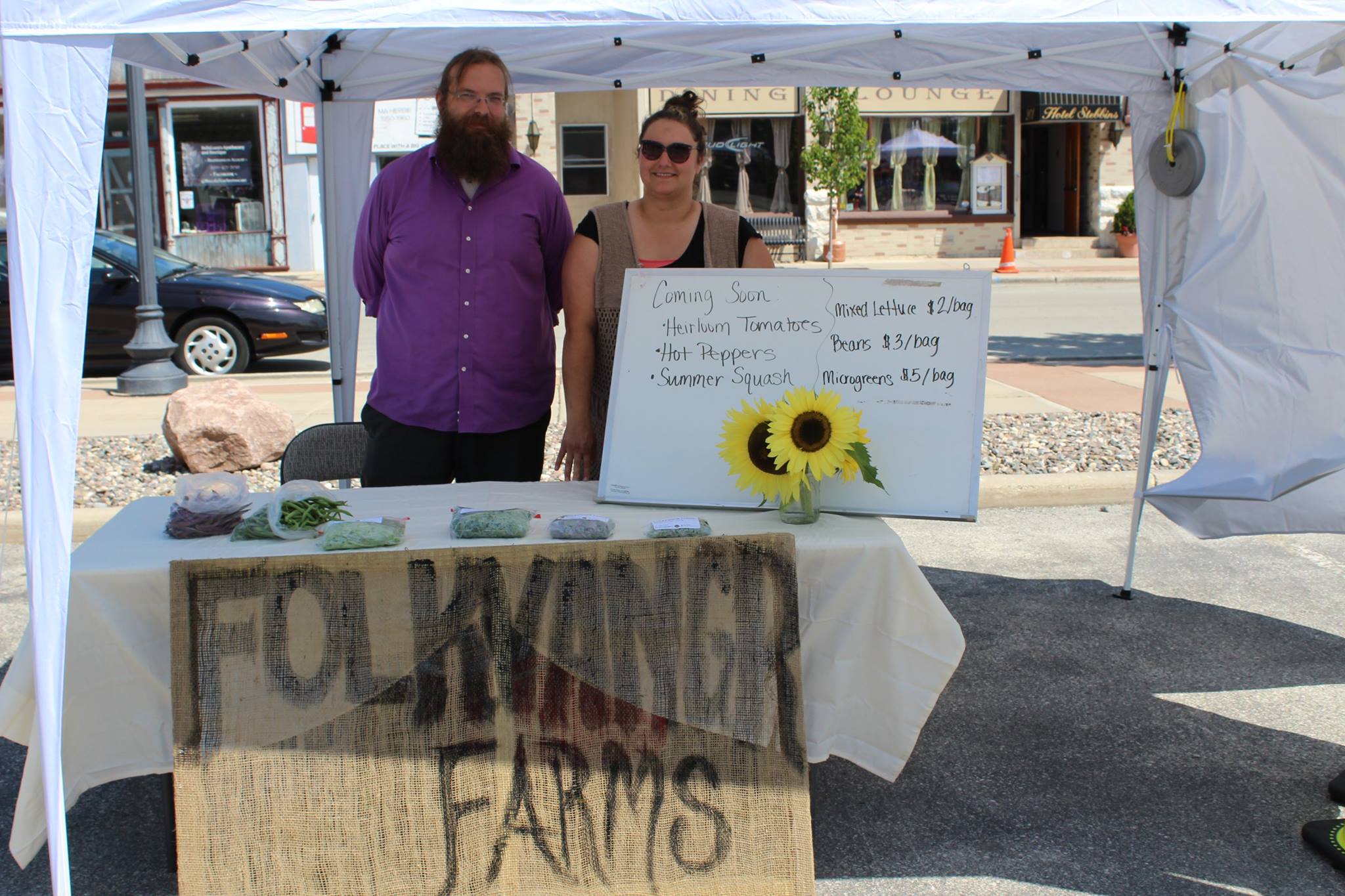 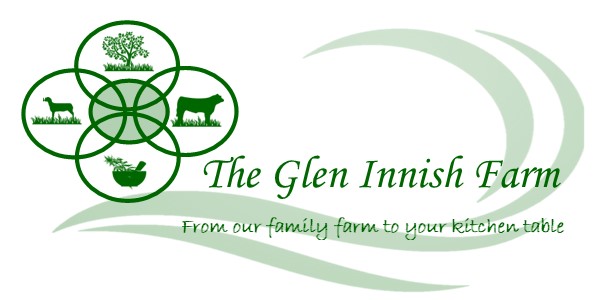 What Glen Innish Farm will be bringing to the Algoma Sunday Famers Market:

Sperber’s Farm Market was purchased by Jessica Sperber Gerdmann’s great grandparents back in 1921. Jessica and her husband Bryce and their four children took over the gardening and attending the Sturgeon Bay market in 2017.

Jessica is the 3rd generation to be growing vegetables and attending markets. Her Great Aunt Helen used to be a vendor in Algoma back in the 1980s and 1990s. Jessica remembers going with her to the Algoma market on Saturday morning and with her grandmother to the Sturgeon Bay market. After her grandma and great aunt passed, Jessica’s dad took over growing the vegetables and her children would help when needed.

Since 2017 the entire family grows vegetables, cans and freezes from the garden and as well as raises their own meat. They have all learned that raising their own food tastes a lot better than from stores!

What Sperber’s Farm Market will be bringing to the Algoma Sunday Famers Market:

Sperber’s Farm Market is located at 6555 Tagge Road in Sturgeon Bay, WI and is a WIC and Senior Check approved vendor.

The Daft Crones (late session only)

Launched at Shanty Days 2021, The Daft Crones is a veteran-owned start-up business local to Kewaunee County.

The Daft Crones Store specializes in providing handmade body care products made in small batches using only the finest herbs and natural ingredients.

What The Daft Clones will be bringing to the Algoma Sunday Famers Market:

The Daft Crones is located at 425 Main Street in Luxemburg, WI.

Sap Happy Maple Products originated in 2011 when Jason and Becky Jorns began tapping eight maple trees in their front yard. Jason is the 4th generation of maple syrup producers in his family and he missed the practice of sap collection he had grown up with, so he and his wife  decided to expand this seasonal passion into a family-owned business of their own.

The process of collecting tree sap is both time-sensitive and well as labor-intensive.  Individual trees are first drilled and then tapped with a hollow metal tube. Sap is collected in buckets hanging off the trunk of the maple trees. From there, it is collected and poured into tanks on a tractor or four-wheeler that can maneuver more easily in the hardwoods. Eventually, the sap is taken to their sugar shack located in Sturgeon Bay, WI where it is rendered for hours using the right combination of temperature and time to create the goodness of natural maple syrup.

We take pride in the fact that we use organic practices and produce maple syrup the old fashioned way, hauling alot of buckets and cooking over a wood-fed fire.  Syrup season may only last a couple weeks to a couple months but they work hard at it all year long cutting and stacking their firewood for the next season.

Collecting tree sap is our meditation in early spring. The snow, sunlight and branches of the trees are beautiful. All the hard work comes back to us when we see repeat customers and hear how much they enjoy our syrup.

What Sap Happy will be bringing to the Algoma Sunday Famers Market: 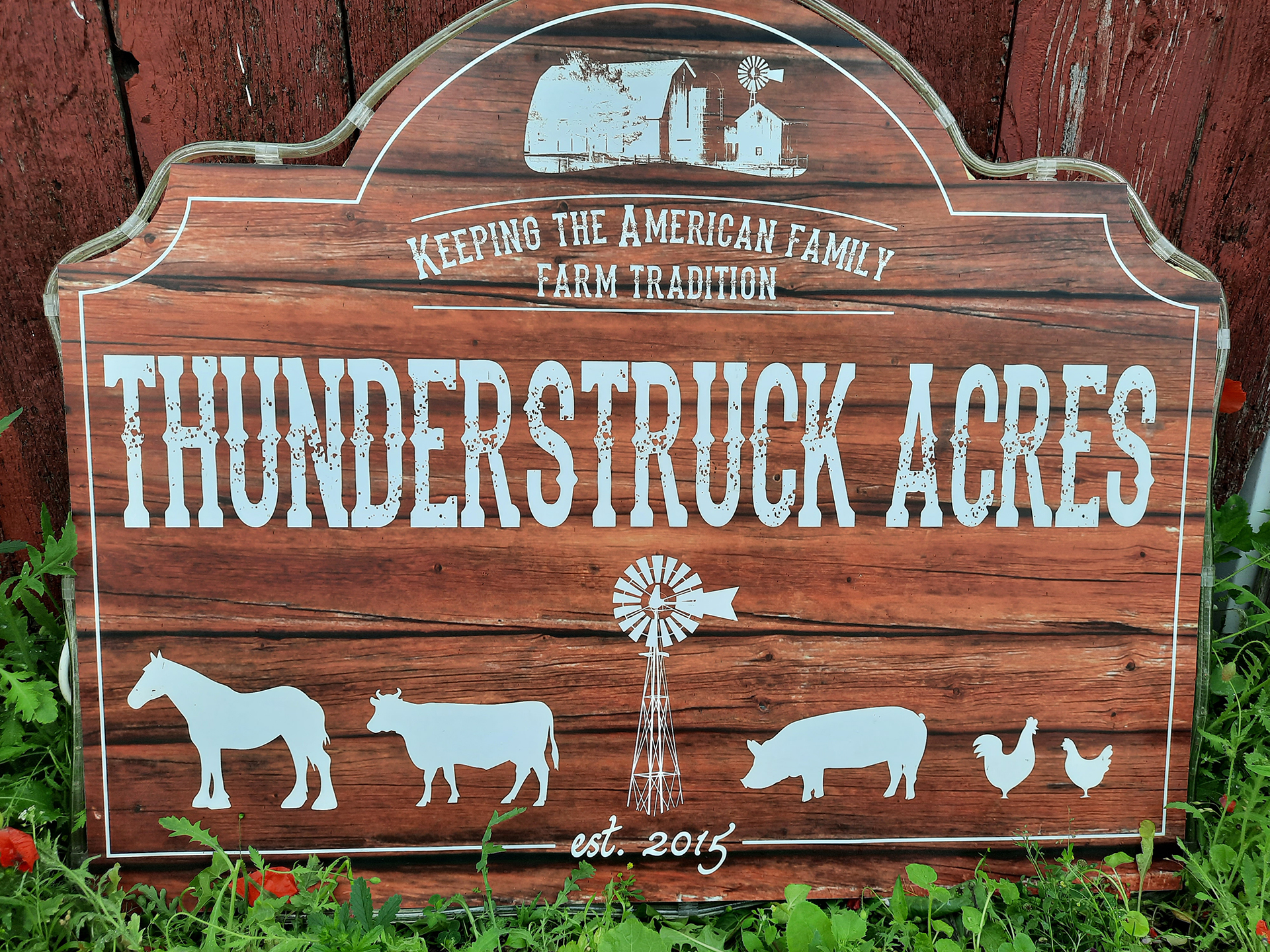 Thunderstruck’s 10 acres has been turned into pasture to graze its Normande cattle, Idaho pasture pigs, and red ranger chickens.

What Thunderstruck Acres will  be bringing to the 2021 market:
Grass-fed beef, pork, pasture-raised chicken and free range eggs, along with some produce.

Please check back for the 2022 vendor contract and pricing. 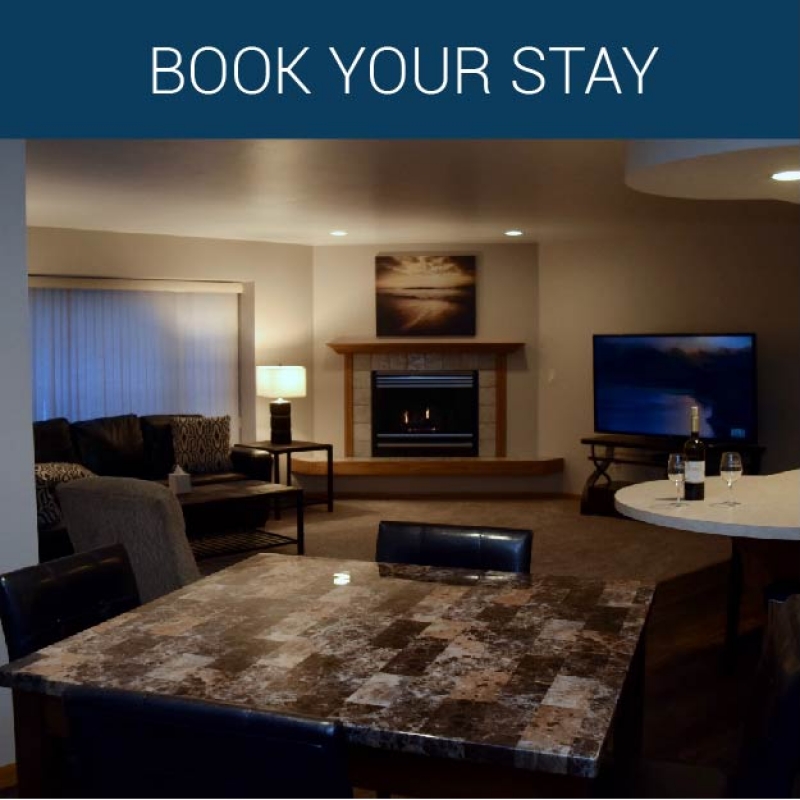 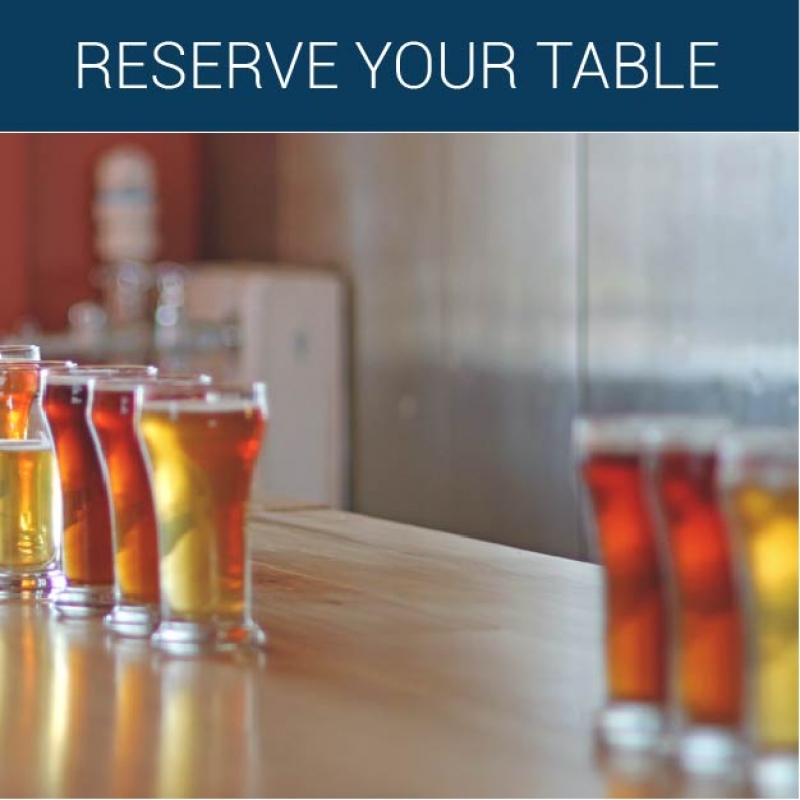 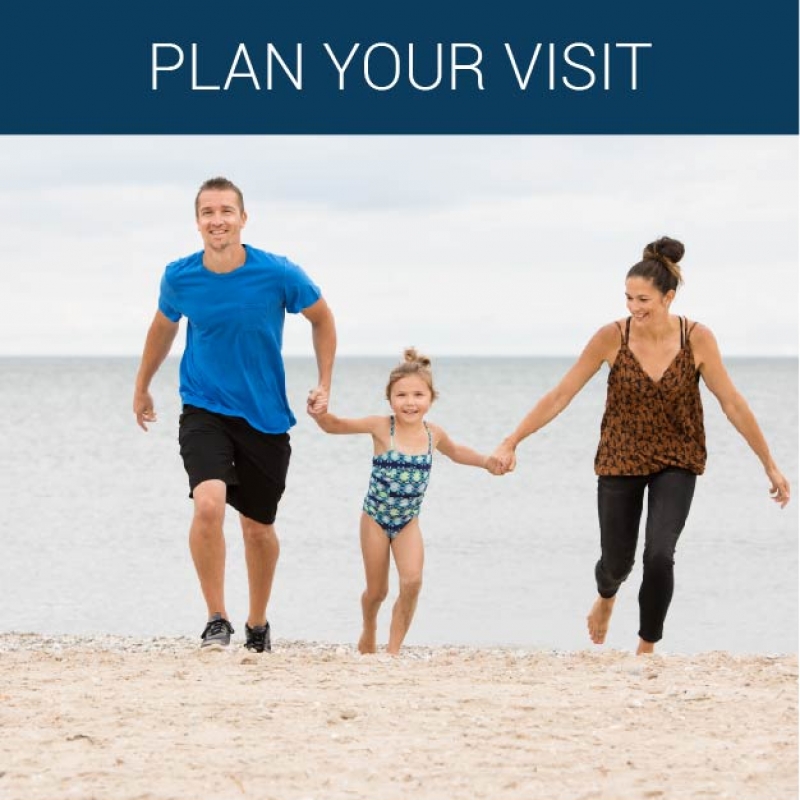